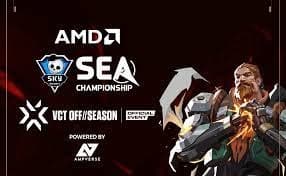 After Velocity Gaming beat Revenant today in the Best of 3 Decider, the top two teams from the Skyesports SEA Championship – India Qualifier have been determined. God Squad (Global Esports) and Velocity Gaming have advanced to the main event in Thailand. These two teams now join BLEED Esports and Made in Thailand on the main stage.

Chennai-based Skyesports is set to host its first SEA-exclusive tournament. As a result of the collaboration that it has formed with Ampverse, Skyesports has announced that it would contribute a total of one million dollars to the prize pools of the next online and LAN competitions that will take place in Southeast Asia between the years 2022 and 2023.

Skyesports SEA Championship will be an off-VCT Season event for the teams who didn’t make the cut to the franchising scheme although we have Global Esports who made it through the Indian Qualifier to advance to the event.

We have four teams who lock horns in the Skyesports SEA Championship for the $15,000 USD Prize money and the SEA crown. The list for the same is as follows :

For more updates on the Skyesports SEA Championship, make sure to follow TalkEsport on Google News.